In this section, I am going to do profiles of elite gymnasts. For my first one, I'm going with the road less traveled and profiling a lesser known gymnast, Ksenia Afanaseyva. 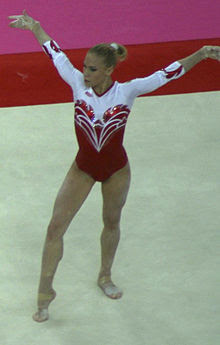 Ksenia was Russia's team captain at the London Olympics. She was also part of the team in 2008 in Beijing. She's by far the most experienced gymnast selected for the team. She qualified in 6th place, but due to the FIG's crappy-ass "two per country" rule, she wasn't able to advance to the all-around. She was a victim of this rule at the 2010 World Championships after she qualified in 17th. Ksenia qualified in second for the floor exercise, but didn't medal. Even without an individual title to her name, Ksenia, ever the professional, stayed consistent and strong in the team final and helped Russia win their first World Championship team medal since 2003.

Ksenia got her chance to shine in the spotlight at the 2011 World Championships in Tokyo. Ksenia wasn't originally slated to compete in the floor exercise final. But, after Diana Bulimar of Romania got injured and the coaches withdrew teammate Viktoria Komova, Ksenia was in. She scored a 15.133 and won the gold medal, her first individual World Championship title.
Here is Ksenia's gold medal winning routine from Tokyo:

In 2012, Ksenia wasn't able to compete in the European Championships due to a minor leg injury. She was still selected for London. She stuck to balance beam and floor exercise, her best events. She qualified for both event finals. In the team competition, she contributed a solid 14.833 on the beam, but on floor, after a disastrous fall on her last tumbling pass, scored a 14.333. The team still took silver. In the event finals, she took fifth place in the beam final and sixth in the floor final.

Ksenia and the rest of the Russian Olympic team are back in training, hopefully in preparation for Rio, 2016.

Here is Ksenia on the floor in London.

Yesterday, US gymnast Maddie Desch announced her retirement from elite gymnastics via her Instagram account. Maddie, who trains at Great American Gymnastics Express, aka "GAGE" explained she came to the decision to retire due to a nagging injury that prevented her from training at the elite level.
1 comment
Read more

In 1992, Dominique Moceanu was a baby junior gymnast with big dreams. The ten, soon to be eleven-year-old had started training with Bela and Marta Karolyi after her family moved to Texas in 1991.
Post a Comment
Read more