February 25, 2016
Last week's power rankings was a hit, so I'm doing them again this week.

Again, these aren't the official rankings from Road to Nationals. I am basing my "rankings" on news events, stories, people that are gaining attention and other random things that I find interesting or worth mentioning.

Last week, the power rankings were:

Who or what made the cut this week? Click "read more" to find out.

The RQS, or Regional Qualifying Scores, were released as of Monday. The rankings were mostly as expected. Florida is # 2, Oklahoma # 1 etc. etc. What's more interesting is the teams that are right on the cusp. Last week, Boise State was ranked # 9, but they were bumped to # 11 with RQS. Still, they're # 11 in the midst of some legends in NCAA gymnastics. The fact that they're not one of the big conference schools, (they're in the Mountain Rim Gymnastics Conference, this conference is BYU, Utah State, Southern Utah and Boise State. Denver used to be part of this conference until they switched to the Big 12 last summer). Denver and Stanford are in a battle for the 12th spot, separated by only .04. This will be really interesting to watch going into the post season. There are a lot of teams that are vying for that coveted NCAAs spot. 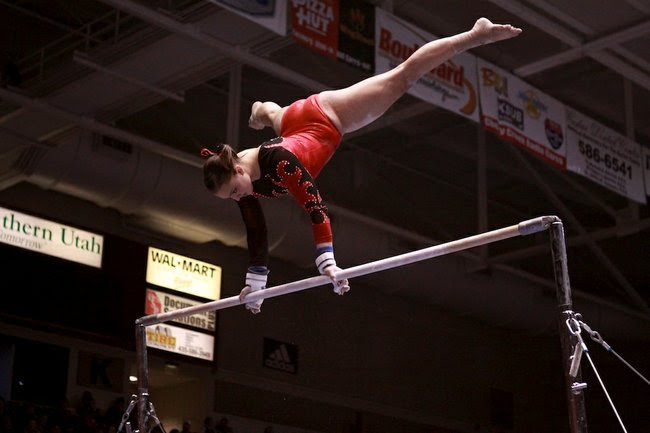 Southern Utah upset one of the top teams in the NCAA this weekend at their home tri-meet, Michigan.  Michigan has looked very solid all year long, but this weekend, maybe the high altitude got to them. There were several mistakes that cost them the win, especially on beam.  But, after that, there was Southern Utah, nipping at Michigan's heels, especially after a pretty splat-tastic beam rotation. Southern Utah posted a bunch of 9.9 +'s on floor and next thing you, know, Southern Utah had a 196.300 to Michigan's 195.750. There have been so many upsets this season, and I enjoy seeing upsets. It's nice to see new talent breaking through. At home, Washington almost upset UCLA, had it not been for some stellar floor scores from the bottom half of UCLA's floor rotation, they would have upset. In reviewing the scores, it really could have happened. UCLA posted some high scores, but Washington's scores were far more consistent. Had Washington scored a couple of tenths higher, they would have easily upset them. Which brings me to my next power ranking... 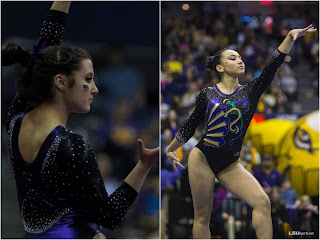 I'm labeling these two as "underrated" athletes because they may not always get the attention they deserve, especially when there are more talked about athletes on a team or in a given competition. This week, I'm shouting out Joslyn Goings and Myia Hambrick. Joslyn Goings is another super talented athlete on Washington's team. In the past couple of weeks, she's become a very reliable all-around performer (also taking some pressure off Allie Northey). She took second on beam with a 9.9 to the lovely Danusia Francis with a fabulous routine.  I'm looking forward to seeing how far this athlete will go. Myia Hambrick has been a staple in the all-around for LSU this season. She's been a stellar performer for LSU especially on beam, where she's scored between a 9.825 - 9.9 every week for the past month. She's such a delightful performer to watch. Perhaps she's getting her time the spotlight because LSU lost three stellar performers in last year's senior class, Rheagan Courville, Jessie Jordan and Liomencia Hall.  Those three left some very big holes to fill in the line-ups. Perfect for someone potentially waiting in the wings like Myia. Since she's a sophomore, she's still got two more years of great gymnastics for us to look forward to. I listed her as underrated because the conversation around LSU revolves around Ashleigh Gnat, Sarah Finnegan, McKenna Kelly, Lexie Priessman etc, all of whom are stellar athletes, so this isn't derogatory towards them at all. All I am saying is that with a team that is dominated with huge talent, some talented athletes fall a little more under the radar. Speaking of LSU... This week, LSU had a dynamite meet against Auburn at home, scoring a high of 197.825. They looked the best they've looked all season long. They're starting to get things together (with the exception of Lexie Priessman injuring herself for the billionth time) and their line ups are looking as they should, solid and consistent. On floor, they were looking like the LSU of last year, scoring a ginormous 49.700 on floor, with a 10 from Ashleigh Gnat and a bunch of 9.9 plus scores, dropping only a 9.85 from Sydney Ewing.  Jessica Savona was back in the floor line-ups for the first time this season. It was glorious. She opened with a huge one and a half step out through to a double back and for her middle mass, she did a full in. McKenna Kelly scored her best score of the season, of course, I'm sure it didn't hurt that she brought back Liomencia Hall's seat drop in her routine. 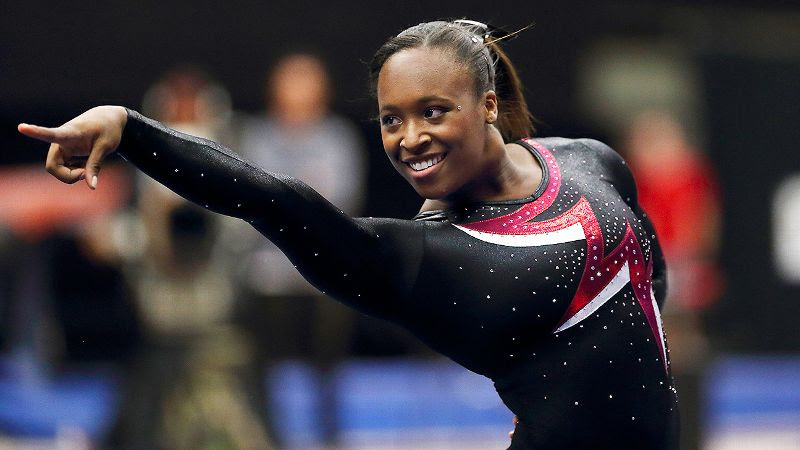 Most of the time for gymnasts, the floor exercise is a solo performance. But Ebee Price is really not your typical athlete.Elizabeth "Ebee" Price is certainly one of the most dynamic floor workers in the NCAA. At Stanford's home meet against Utah. Ebee performed a dynamic, difficult floor routine with plenty of energy to boot. Her routine scored a 9.925, giving her the floor exercise title. The Stanford University Cheerleaders were on hand to provide some extra spirit for the Cardinals. During her floor routine, the cheerleaders had such enthusiasm for Ebee, they danced in synchronicity with Ebee, giving her her own line of back-up dancers. I think Ebee's ready for her close up on Ellen after Sophina DeJesus! You can see some of Ebee's dynamic tumbling in the video below.

Stanford produced multiple individual highlight performances in a defeat against Utah, as the Cardinal celebrated its seniors one final time at home. #GoStanford #SWG2016Recap » http://stanford.io/1Vw7CFG
Posted by Stanford Women's Gymnastics on Saturday, February 20, 2016

May 29, 2016
Yesterday, US gymnast Maddie Desch announced her retirement from elite gymnastics via her Instagram account. Maddie, who trains at Great American Gymnastics Express, aka "GAGE" explained she came to the decision to retire due to a nagging injury that prevented her from training at the elite level.
1 comment
Read more